Click Here for a letter from our friends at the Consulate General of Ireland, NY

The band formally adopted the name Richmond County Pipes & Drums in 1975. This name was agreed upon to show our close affiliation to the Borough of Richmond and its many members who lived on Staten Island.

By this time, the band had a total of 24 members. The band made its first public appearance at the St. Patrick’s Day Dance at St. Clare’s Church in Great Kills in March of 1976. The first parade the band participated in was Columbus Day on New Dorp Lane in Staten Island with Laurence Ronan as Drum Major, James Matheson as Pipe Major and Pete Fiore as the bass drummer.

The band continued to grow and expand. It was incorporated under the laws of New York State as a non-profit organization in 1980 as “Richmond County Pipes & Drums, Inc.” In April of that same year the band Constitution was adopted. The constitution was carefully crafted to give all band members and equal democratic vote in the band affairs. To this day, a copy of that original constitution is given to all new members to adhere to.

Our meeting location changed many times over the years. After St. Margaret Mary we moved on to St. Clare’s Church then to St. Andrews Church in Richmondtown. The band currently meets at St. Alban’s Church in Eltingville every Thursday night.

In February of 2006, high quality matching chanters were purchased by the band treasury and engraved with “RCPD” on the bottom. Each chanter was assigned a special number. These chanters were then blessed by Father Bartley from St. Paul’s Church.

In March of 2006 the band hosted a 30th Anniversary Dinner Dance at the Staaten to celebrate the members’ dedication and strong leadership over the past three decades.

In December of 2016, the band hosted its 40th Anniversary Dinner Dance with a lot of alumni present to support us still all these years later.

RCPD has been successful at attaining its goals with the help of its members, many loyal supporters and business partners over the years.

We are a registered 501(c)3 not for profit tax exempt organization.  We have participated in hundreds of events on Staten Island, Brooklyn, Queens, NYC, upstate New York, New Jersey, Long Island and Pennsylvania. The band appreciates the continued support of many organizations that is has had the pleasure of dealing with over the last 40 years. As the years have come and gone, many new officers and members of the band have contributed it its legacy.

The future is bright for the band that we've all come to love and we look forward to extending this history for many years to come.

Click Here to View Our Gallery Thru the Years. 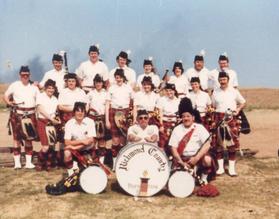 The Richmond County Pipes & Drums had its beginnings with a few members gathering to learn and play the bagpipes and drums.

The first leaders of the organization were Gary Clark as Band Master, James Matheson as Pipe Major and Laurence Ronan as Treasurer. Practice was first held at St. Margaret Mary’s Church in Midland Beach. The inspiration to found a bagpipe band with its roots based on Staten Island and its members from Staten Island was developed. It was to be a band dedicated to its Celtic and American culture and would be a family based band. In addition, the band was to foster and develop camaraderie among its members by practice and sharing of the ancient Celtic tradition of bagpipe music with the emphasis on passing this tradition to its younger members. 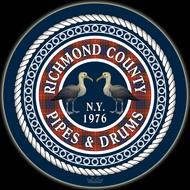